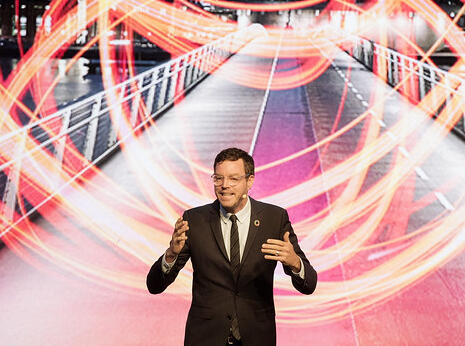 The European Commission brings together key players from across the continent to present and discuss Horizon Europe, the new framework for improving the lives for the majority of people in Europe.

European Innovation Partnership on Smart Cities and Communities (EIP-SCC), the Smart Cities Information System (SCIS) and European networks like EUROCITIES and Open & Agile Smart Cities (OASC) as well as actors from across the continent, are joining the Commission in the workshop “On a Mission for the European Cities of the Future - Achievements, Challenges, Opportunities” on September 24.

The parties will discuss the Horizon Europe mission on carbon neutral and smart cities. In addition, European Commission officials will attend the final conference of the Horizon 2020 Lighthouse project Triangulum (23 September) and intervene in the opening plenary of Nordic Edge Expo.

Get tickets to get insights into the possibilities within the Horizon Europe programme:?

Changes Must Be Done

Two thirds of Europe’s population live in urban areas and would immediately benefit from a more coherent and integrated approach to the grand challenges such as climate change. And while progress in cutting CO2 emissions and the delivery of core solutions is encouraging, far more needs to be done! This is why the European Commission launches the mission on “Climate-Neutral &Smart Cities.”The European Union is launching its mission on cities to tackle crucial issues for a more sustainable future, says Haitze Siemers, Head of Unit in DG Energy who is due to hold a keynote speech at Nordic Edge Expos main stage.

We want the mission's title and objectives to speak loud and clear to everyone’s inspiration and to create ownership across Europe’s civil society, not least involving young people, at the highest possible level. It's all about doing the right and most needed things with the engagement of Europe’s civil society: improving the quality of life, using technology as an enabler. The single fact that roughly 75% of the EU’s population live in cities is reason enough to think about a specific, effective and efficient policy framework for cities in support of the most pressing European challenges. One of these areas is climate change, the energy transition, and meeting the objectives of the Paris Agreement, Siemers adds.

Delivering an European Mission on Cities means improving the life of the majority of EU’s population by accelerating investments for sustainable energy and climate adaptation, as well as related areas such as ICT, health and environment.

We need to focus on turning research and innovations into results on the ground, putting an emphasis on deployment, replication, scaling up and thus a dramatically accelerated market uptake of solutions to meet the grand challenges of today, especially and most effectively in the urban context, Siemers says.

The Stavanger Region European office has been a co-organisor at Nordic Edge Expo since the very beginning. The director of the office, Heidi Kristina Jakobsen, is pleased with the European Commission’s  engagement in the Nordic Edge Expo 2019.

The European Commission has always been supportive of the NEE and have actively contributed to every edition since the start in 2015. That the Commission puts the strategically important debate on city missions on the agenda, illustrates the relevance of Nordic Edge as the meeting place for smart cities, says Jakobsen.

European cooperation has been vital for the smart work in the Stavanger Region. The Horizon funded lighthouse project Triangulum is a milestone that amongst other things have sparked the establishment of the Nordic Edge Expo. Now that Triangulum and the other first generation lighthouse projects are entering their last phases, it is extra timely to come together i na workshop and discuss the future of smart cities, says Jakobsen.